Three Simple Ideas that Changed my Life by jockobutters

You  might know I’m a huge reddit fan. Such a great site for silly gifs, inspiring videos, pictures of cats. Of course. And the occasional interesting bit of news or worthwhile read.

I’ve been poking around there as usual and stumbled across this article that really got me thinking. I actually woke up thinking about the second one last night.

Let’s get right to it.

Three simple ideas that changed my life by jockobutters

I’ve been wanting to write down these ideas for awhile in the hopes that someone else might find them useful. I know this sub has a tendency toward contrarianism, and I certainly do not intend these ideas to be “universal” – but just wanted to present these things that have personally worked for me and can maybe benefit someone else. If I slip into direct address and say “you” – I’m really just referring to myself.

Long story short – about two years ago, I hated where I was in life. It was the recognition of these three ideas that kept me going and helped me to turn my life around. I should add that these ideas aren’t original, but things that I’ve come across during that time and paraphrased one way or another.

1. The human being is meant to bear the burden of 24 hours — no more, no less. If you live in the future, you will get anxious; if you live in the past, you will get depressed. Twenty four hours is all that you have to live in. Give up all the other burdens to the universe, to god, to your cat, to whatever – but the burdens of the past are not yours. The burdens of the future aren’t yours either. Let them go. The day is your material. It’s what’s in front of you, it’s the only thing that you have the power to change or to shape or to use. It’s your canvas. It’s your material. So use it well. 2. Happiness is not something you can pursue – but instead the byproduct of doing the right thing. We get so tripped up thinking that happiness is an end goal — and then get frustrated when it slips through our fingers. Instead, focus on whatever the right thing is – and happiness will follow. Feel like shit at the end of the day? Maybe it’s because you ate a tub of ice cream for dinner, forgot to call your mom back, blew off homework to play video games, etc. On the surface, those are all things that should make you “happy” – but I’ve found that when I’m feeling most depressed, its usually a factor of actions I either did or (more likely) did not do. If you’re passively waiting for happiness to wash over you like a wave — it’s not going to happen. Instead, take action, do whatever the “right thing” is, and that feeling of warmth and fulfillment will follow of its own accord. 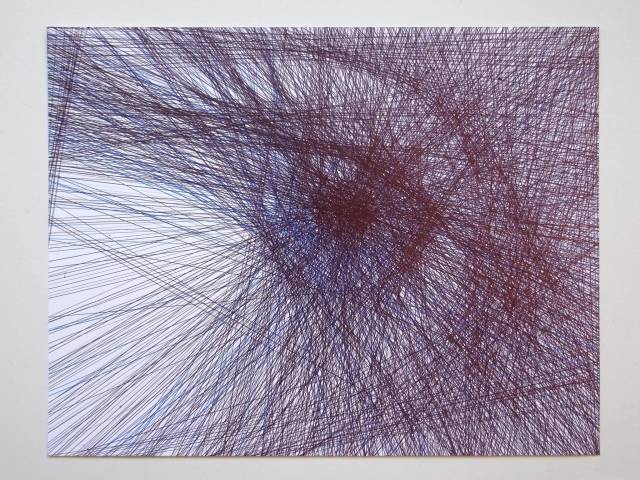 (Every Line goes through the whole image by no_more_gravity)

3. The world’s idea of success is total sh!t. Don’t get sucked into it. On television, on the street, when talking with friends or family – it seems like everyone confuses the concept of rewards with success itself. Whether it’s money, fame, recognition, praise, sex, the rewards are not up to you — they are all dependent on someone else. Instead, think of success as sustained effort of will. It begins and ends with YOU, and no one else. Think of any fantasy or goal you may have — say you’ve always wanted to be a great artist. Imagine it. What does that look like? I guarantee you’re thinking about palling around in Paris with beautiful women and having your artwork admired in galleries and being given the nobel prize – basically you’re fantasizing about having been a great artist and not actually making the art. That way of thinking can totally mess you up because it once again puts the emphasis on passive recognition over active, sustained effort. The more you shift focus onto your own actions, the more you create sustained effort, and the more likely it is that the rewards will follow.

(What only exists in the mind by AscendingStorm)

Lastly, as a bit of an addendum – it’s good to remember the difference between stopping and quitting. This helps me when I’m feeling a bit lost or down on myself — or during those times when I’ve just chucked these three ideas to the wind and sat on the couch all day instead. If you’ve ever strayed from what you feel you were supposed to do or who you were supposed to be – remember that everyone has to stop. Whatever it is we’re doing, whatever our grand ambitions are in life, we stop. We have to stop. We have to take a piss, or go to bed, or go on vacation, or we have a kid and not have much time to ourselves etc. But quitting is stopping without ever beginning again. So as long as you’re here, as long as you’re alive and pulling air through your lungs, you can begin again. And if you begin again, then you haven’t quit. So f*cking begin again.

Hope this helps someone out there.

Jeremi McManus is a Relationship Therapist, Couples Therapist, and Author who works with people who want more fulfilling and satisfying relationships. His own ups and downs in dating and relating were instrumental in leading him into this field. If you feel like you could use some perspective, he looks forward to hearing from you. Jeremi is a Licensed Psychotherapist and delighted to call San Francisco home.